What’s a conductor’s instrument? The orchestra, or rather, the mind, the score? A stick?

It is not only since Disney’s Fantasia that conductors get compared to magicians, and conducting sticks to magic wands. Ever wondered where conductors get their batons from? One would like to imagine there’s a shop like Mr. Olivander’s Shop for Fine Wands from Harry Potter, only for batons. Give them a flick, or do some imaginary conducting of their favourite piece?

What makes a fine conduting stick?

Conducting sticks were formerly made from ivory, but today are made from wood, fiberglass or carbon fibre, attached to a hilt made from cork or wood.  Most conductors get their sticks from specialized shops – though, unfortunately, less magical ones than Olivander’s. JD has his handcrafted and custom made by Craig Tomlinson, otherwise known as an outstanding Canadian master harpsichord maker. Few people know he also makes fine conducting sticks. No phoenix feather for a core, though!

JD: “I like mine to be well balanced with the balance point right at the handle. At present, I’m mostly using one with an ebony handle. I do prefer rare woods and I like the baton to have a certain weight, so cork won’t do. It may sound funny, but I used to have shoulder problems when using lighter conducting sticks.  I guess a heavier baton forces me to think more about my posture and the way I use my body.”

A bit of stick history

In history, the baton has seen an evolution of shrinkage. In the 17th century, conductors still conducted by beating the rhythm on the floor with a large staff. Famously, Jean-Baptiste Lully, court composer of Louis XIV, died from a sepsis after accidentally smashing his big toe with the staff.

Although smaller conducting sticks have been in use as early as 1594 (by nuns in san Vito lo Capo in Italy), they became the regular equipment of conductors in the 19th-century. Carl Maria von Weber and Felix Mendelssohn Bartholdy were among the first to regularly conduct with a small conducting stick.

Richard Wagner reportedly favoured a rather heavyly ornamented ivory staff. Some of the great conductors of the 20th century, however, have preferred conducting without a baton – Pierre Boulez  and Kurt Mazur are famous examples.

This summer, the world’s largest exhibition of conducting batons was on display in Stralsund, Germany, including some richly ornamented silver, ivory, and mahogany batons formerly owned by famous conductors.

With or without “la baguette”?

Lately, as in the 4th Philharmonic Concert last season,  Jonthan Darlington has taken to conducting some pieces without a stick.

JD: “As for the stick or no stick question: I’d say that contemporary music works better with a stick, but I like conducting romantic pieces without one.”

Is there a favourite, a lucky conducting stick? For the important premieres?

JD: “No. I’m not superstitious about that. If I break one I simply get a new one. Anyways, for the magic to happen, it takes the effort of everyone, the orchestra, the conductor – and the audience. The latter being perhaps the most important part.”

‘Demigods’ in Tailcoats or ‘Penguins’?

Once a regular evening and festive dress, the tailcoat’s former social significance is today but a dim memory that only rarely resurfaces on wedding invitations that demand “white tie”. But the days of the “white tie” seem numbered. In the past two decades conductors slowly began to follow a trend set by soloists (especially violinists) to change the outdated garment for something more comfortable.

Pierre Boulez, who JD was heavily influenced by, called out at various occasions: “Get rid of that tailcoat!”

Jonathan Darlington also thinks of tailcoats as “rather anachronistically bizarre”.

JD: “Ever since I was a child I have wondered why it was necessary to look like that on stage. Did it make them play better? Had they stopped off on their way to some fancy dress party? It makes a strong impression on a child’s psyche and to this day it still amazes me.”

(It will seem that even educational children’s literature on classical music has to try and familiarize young audiences with this outfit: http://www.kinderbuch-couch.de/weidinger-erich-moritz-und-der-dirigent.html)

When one thinks of tailcoats, images of Fred Astaire come to mind, as do the old conductor masters like Strauss, Stokovski or Beecham.

The invention of the tailcoat is mostly attributed to none other than the ur-dandy George (Beau) Brummel in the 1830ies.  It evolved from the English riding coat (which eventually shrank as the coat was cut away to make riding easier).  What Brummel wore was new, chic and quickly immitated. Already by the 1850s it became regular evening wear of the gentry and slowly lost it’s dandy image.

In the beginning, tailcoats were not necessarily black, but came in all colours. Just think of Goethe’s Werther and his famed blue tailcoat with yellow trousers!

As evening wear, they thus automatically became the regular equipment of conductors and musicians alike – since concerts are given in the evening –  and certainly by 1900 they were always black.

The main reason for its popularity among musicians was the freedom of movement that the tailcoat provides compared to other garments of the time: It doesn’t shift with the arms to reveal the shirt when a conductor raises his arms, as would any other suit.

But why does the orchestra dress code cling to it after it has lost its social meaning?

JD: “I can think of no good logical reason for it except that perhaps the very act of dressing up lends the event some sort of ‘special’ aura. The ladies however, although usually dressed in black as well, are thoroughly modern in their clothing. Should they not also be bedecked in something equally anachronistic?” 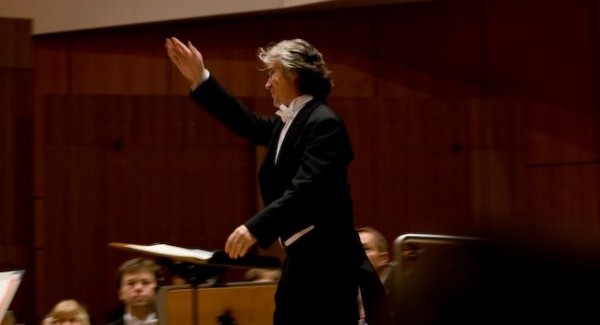 A change in role?

Several well known conductors today have made their different attire a trade mark (John Eliot Gardener comes to mind). But this change brings a dilemma: How to chose a functional outfit without looking too casual, how to still maintain a festive aura– or should a concert be festive at all? Should the conductor stand apart visually from the musicians – and if yes, why?

The change of costume seems to come with a change of role: conductors today are no longer the austere figures they used to be, unquestionable authorities with white ties. With a changed view of leadership, the robe of authority is put into question.

Can a change of dress influence the perception of the conductor?

JD: “It gives us a sort of style and, like all dress wear, makes a statement about who we are and what image we are trying to project. It’s a part of communication -with both audience and orchestra.”

Jonathan Darlington’s own “conversion to the cause”, as he puts it, is relatively recent and happened very much for the same reasons that had made the tailcoat popular in the first place: functionality and style.

JD: “It was mainly because I kept on forgetting various articles of the normal clothing which led to some embarrassing situations. – Try standing up in front of an orchestra with half your shirt buttons missing, a bow tie that won’t stay on and trousers that have difficulty staying up and you’ll see what I mean.”

Not surprisingly, like with his batons, the maestro had his new outfit custom made by Parvin Mirhadin, a costume designer at Vancouver Opera. It was modeled after another leisure coat that he had purchased on a trip to Asia.

JD: “It is fitted – rather as a dancer’s costume would be – to give me maximum flexibility without (I hope) looking like a sack. It is rather ‘Pandit Nehru’ – as a friend once described it -in design and only goes to show I guess that I’ve exchanged one illogical fancy-dress outfit for another. At least it consists of fewer pieces for me to forget.”

A Big Heart For "Kleine Herzen"

Jonathan Darlington is a supporter of “Kleine Herzen”, a non-profit organization who support children living in economically disadvantaged countries.

“I am very excited about having the opportunity to give my wholehearted support to the kleine herzen organization. I can think of nothing more worthwhile than to be able to help and give to those who haven’t had the same good fortune in life as I have; especially children. What the foundation has achieved with very limited means and within such a short space of time is nothing short of miraculous. I can only admire the effort and dedication of all those involved and lend as much help and support as possible while encouraging others to do the same.